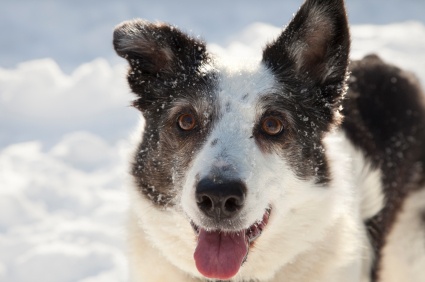 When we got Smokey to the vet, they whisked him away, shoved charcoal down his throat to absorb as much of the poison as possible, and desperately tried to flush his system with fluids to help get the poison out. They finally came back into the exam room and told us that we should prepare ourselves, because he might not make it. I was shocked and so upset...he was our new puppy and they were telling us that he might not live! And what was worse was that when they brought him in to say what could be a final goodbye, his tail was just wagging away and he was prancing around like nothing was wrong! Antifreeze poisoning gives dogs the appearance of being "drunk" and that was what we were seeing then.
We were so lucky...we saved our puppy with some quick action and a good vet, and thank the stars that I had known about how poisonous antifreeze is for dogs.
Now, where is your antifreeze? Is it in a safe location, where an industrious dog cannot reach it? Consider that dogs can jump fences and dig under things, and knock over boxes, and make sure that yours is stored in a place where it is completely inaccessible. Do not store it in the back of your SUV and then put your dog in there with it! Antifreeze is sweet and smells good and dogs seek it out. Better yet, use antifreeze that does not contain ethylene glycol.
And be sure to watch out for it on your walks. People often spill a little when filling their cars, and it lands on the ground in a little puddle. Tiny dogs could lick that up and it could be fatal. Keep your eye out and watch for bottles of antifreeze and try to educate people about the extreme danger of leaving even a trace of it where a dog might get to it. (All the more reason for dogs not to be roaming the neighborhood.
If you liked this Q&A please share with your friends and family. Message us {woof@geminidogs.com} and let us know what Question we can answer for you!
WOOF!
0 Comments Click here to read/write comments